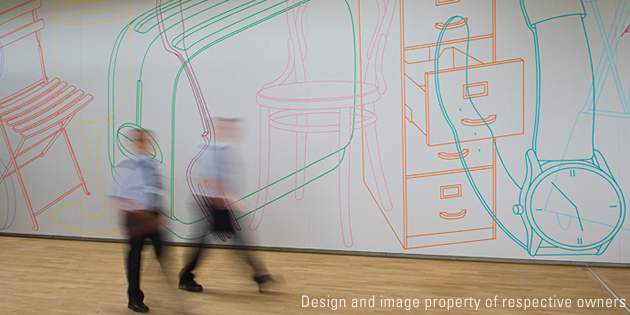 Located in the Kirchberg area of Luxembourg, the East building is linked to the EIB’s existing headquarters, expanding the previously available workspace to 72,500 square metres. Discreet, functional, fully transparent and environmentally-friendly, the building reflects the priorities of the bank. The EIB is devotes a bulk of its lending to projects aimed at protecting the , such as providing backing for projects that help combat global warming.

Renowned for his use of bright colours and images of everyday objects to elevate public spaces into works of art, Craig-Martin produced an 88m long “painting” titled "Parade" for the staff cafeteria, and a “sculpture” set into the floor of the building’s main atrium titled "One World.” Both installations exploit the special properties of Corian® solid surface, using inlaying techniques and a range of specially-developed vibrant colours to create intricate line-drawings on an immense scale.

Michael Craig-Martin has been a driving force in contemporary art for four decades and is considered a key influence on the emergence of the “Young British Artists.” Throughout his career, he has explored the expressive potential of commonplace objects and brought conceptual art to prestigious public spaces, and his latest work for the EIB reflects both of these themes.

“Parade” - “Parade” is an 88m-long by 4m-high installation that covers the wall joining the bank’s older west building (designed by Sir Denys Lasdun in 1980) to the new East building (designed by Ingenhoven Architekten), forming one side of the cafeteria space. The largest work ever produced by Craig-Martin, “Parade” is a compendium of more than 60 different images of everyday objects – from a shoe to a piano, a football to a fire extinguisher. These overlapping images are “drawn” in 20 different bright colours of Corian® against a background of Corian® solid surface in Cameo White. Far more than mere decoration, the designs are intended to be part of the fabric of the building, both transforming and becoming an integral part of the spaces they occupy.

“I try to conceive works that do not appear to be simply added to the building, but rather ones that seek to become engaged – or ‘embedded’ - with the architecture in such an integral way that it becomes difficult to imagine the building without them,” says Craig-Martin.

A number of materials were considered for the production of “Parade,” and the decision to use Corian® solid surface came down to its seamless quality when joined. This feature enabled the images to continue along the full length of the fresco without interruption. The possibility of creating special, custom colours in the material also appealed to Craig-Martin.

However, he says: “I did not believe at first that it would be possible to use modern marquetry to create a work on such an immense scale. The result is a tribute to the exceptional skills of Créa Diffusion, a French company that specialises in the fabrication of Corian® solid surface.” The modern marquetry technique, used to fabricate “Parade,” involved employing CNC machinery to carve out the outline of the images precisely, and then gluing thin strips of Corian® material into the grooves.

According to Thierry Delles, owner of Créa Diffusion, the sheer scale of the installation was the biggest challenge. “Making each section required eight sheets of Corian® solid surface to be joined together onto a frame, and these panels – each weighing 650kg - then had to be lifted by crane into the cafeteria building,” he explains.

Despite the headaches presented by the three month fabrication process, Delles adds, “It has been fascinating to see what Corian® can achieve. This project perfectly demonstrates that Corian® solid surface is a true material – like wood or glass - and we are extremely proud to have played a part in creating this design.” Designed to accompany staff during their “off-duty” moments, “Parade” features images of life outside the world of work and banking. It has no single “point-of-view” because there is no place from which it can be seen in its entirety. Instead, it is a work about movement, change and rhythm.

Craig-Martin explains what he set out to achieve: “I was very conscious of the fact that the people who will see this most often would be employees of the Bank, and that many of them would pass along this way several times every day. I wanted to make a work that was different along its entire length so that each time someone looks, there is the possibility that their eye may catch some image, some detail, some colour they have not noticed before.”

“One World” - The atrium of the EIB presented a particular challenge for Craig-Martin. On the one hand, he says, this dramatic central space – where staff and visitors pass through daily - demanded a “sculpture.” But on the other hand, the floor space needed to remain open for functions and window cleaning.

The solution devised by Craig-Martin is a “sculpture” set into the floor, leaving the floor space completely open and visible from every level and every location in the atrium. “Although it is enormous and visually dominates this complex space, ‘One World’ is a sculpture that takes up no room,” explains Craig-Martin.

“One World” consists of a globe image in four vibrant colours (including custom and readily available colours) set into an oak floor. Realised by fabricator Rosskopf & Partners, this involved inlaying thin strips of Corian® solid surface into the wood. The decision by Craig-Martin to use Corian® material for the installation was due to the material’s durability and solid nature. “I have been interested in using Corian® solid surface for sometime because of its toughness and because the colour runs throughout the material,” he says. “These qualities made Corian® solid surface an obvious choice for ‘One World’. I didn’t want an image painted on the surface of the floor, but set into it, so that the surface would be flush, and for this it needed to be as strong as the oak floor.”

The fact that Corian® could be made in almost any colour was another important factor. Requiring bright, strong colours beyond the ones readily available, Craig-Martin asked DuPont to develop some entirely new colours for use in the EIB project.

The theme of globes was an obvious one for the design’s location at the hub of the international banking environment, although symbolism was not Craig-Martin’s primary objective in proposing this image. “Although my work is based on the use of easily identifiable representational images, I have no interest in symbolism or narrative,” he says. “However there are occasions when a single image can be seen in a specific context to make an indirect but irresistible reference. I saw the globe as such an image in relation to the work of the EIB.”

The simple, almost child-like image actually consists of three globes, overlapping in such a way that they share a single sphere, as though the structures of the globes are rotating around the sphere. Craig-Martin says: “I hope the image reminds people that no matter how many ‘worlds’ there seem to be, there is, in fact, only the one we share.”

Craig-Martin has dedicated “One World” to his father, who was an economist at the World Bank, which meant that the commission from EIB carried a special symbolism and source of inspiration for the artist. “I felt it apposite to pay tribute to my father’s dedication to a development bank, through my own modest contribution to a peer organisation,” he says.

Craig-Martin concludes: “Though designed for the same building, these two projects had completely different criteria in terms of the space they would occupy and the function they would perform: while ‘One World’ is about immediacy and impact, ‘Parade’ is about gradual unfolding over time. Both demonstrate the special characteristics of Corian® and the many possibilities they offer for work in this zone that bridges art and design.“

“The way Corian® has been used in these designs demonstrates how expressive it can be in artistic terms and how much emotional warmth it can bring to public buildings. We are delighted to have been able to collaborate with Michael Craig-Martin on this project.” says Jean-Yves Bach, director of DuPont Building Innovations business for Europe, Middle East and Africa.

The European Investment Bank (EIB) - The EIB is the long-term financing institution of the EU (European Union). It was set up in 1958 under the Treaty of Rome and is owned by the EU Member States. The EIB raises funds on the capital markets which it lends on favourable terms to finance projects furthering EU policy objectives, within and also outside of the EU.

Michael Craig-Martin - Throughout his career and through works with many different media, Craig-Martin has explored the expressive potential of commonplace objects. His best-known works include An oak tree (1973), his large-scale black and white wall drawings and his more recent intensely coloured paintings, installations, public commissions (such as The Fan at Regents Place, London), and collaborations with architects (notably the Laban Dance Centre in Deptford, UK, with Herzog and DeMeuron). Craig-Martin is considered a key influence on the emergence of the Young British Artists in the early 1990s, and has been both a Trustee of Britain’s Tate Gallery and, since 2006, a Royal Academician. Born in Dublin, Ireland in 1941, Craig-Martin studied Fine Art at Yale University School of Art before moving to Britain in 1966, where he has since remained.

Créa Diffusion - Créa Diffusion was founded in Solgne (France) in 1988 as a fabricator of Corian® solid surfaces, and has rapidly become a leader in its field. Headed by Thierry Delles, the company aims to provide complete solutions to both professional and private customers, drawing on its unrivalled know-how and experience in a wide range of sectors such as homes, healthcare and communities. Créa Diffusion is part of the Corian® Quality Network.