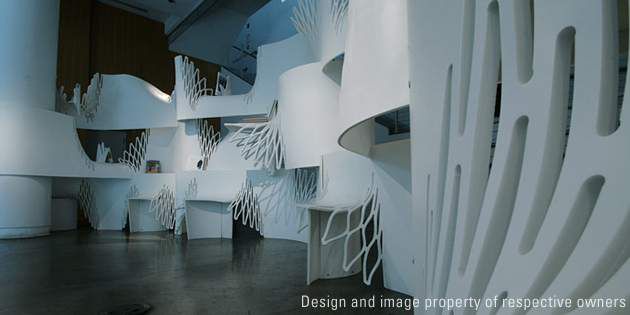 World-renowned designer Vito Acconci oversaw the design (developed by Adam Jakubowski and Bradley Rothenberg of Acconci Studio) of the Lobby-For-The-Time-Being. The Lobby-For-The-Time-Being is a large scale installation made with Corian® solid surface in the light-filled lobby of The Bronx Museum of the Arts that explores how the body inhabits and activates public spaces. Corian® sheets in Glacier White colour were manipulated to resemble fabric – by folding, stretching and curving it into complex geometries.

The standout design feature is a curved Corian® wall attached to two large columns in the middle of the lobby, which branch down, loop around, and push up – creating a seat, table, bookshelf, gathering nook and more. Sensors activate projections, so that visitors using the structures orchestrate a subtle show of shadows and particles of light. The experience is equivalent to throwing one’s voice.

About Vito Acconci and Acconci Studio - Vito Acconci’s early work was fiction and poetry; his last poems reduced words to indices of the writer’s and reader’s travel across the page. In the late 60’s and early 70’s, his first artwork used performance, photos, film and video as instruments of analysis and person-to-person relationships. His audio and video installations of the mid-70s turned an exhibition-space into a community meeting-place. His architectural game of the early 80s made performative spaces for viewers, whose activity resulted in the construction and deconstruction of house prototypes. In the mid-80’s the work crossed over into the architecture, landscape and industrial design; in 1988 he started Acconci Studio, a theoretical design and building workshop.

Their method is, on the one hand, to make a new space by turning an old one inside-out and upside-down; and, on the other hand, to insert within a site a capsule that grows out of itself and morphs itself. Their tendency is toward left-over sites and outlands, where hypotheses might be buildable and testable. They treat architecture as an occasion for activity; they make spaces fluid, changeable, portable. They have recently completed an artificial island in Graz and an adjustable gallery in New York, a clothing store in Tokyo, a plaza in Memphis, a façade for an elevated subway-station in Coney Island.

About The Bronx Museum of the Arts - Founded in 1971, The Bronx Museum of the Arts is a contemporary art museum that connects diverse audiences to the urban experience through its permanent collection, special exhibitions, and education programs. Reflecting the borough's dynamic communities, the Museum is the crossroad where artists, local residents, national and international visitors meet. The Museum’s home on the Grand Concourse is a distinctive contemporary landmark designed by the internationally-renowned firm Arquitectonica.