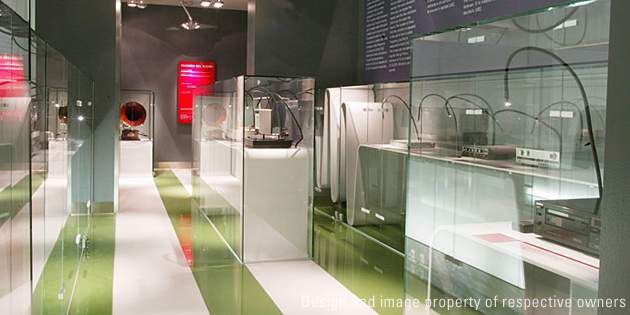 A sound wave produced by a string instrument. This is the source of inspiration for the innovative museum display solutions made with Corian® solid surface at the new Sound Section at the TDK Hall in Milan’s Leonardo da Vinci National Museum of Science and Technology. This is part of an ambitious renewal project, supported by TDK Marketing Italia – a branch of TDK Marketing Europe, produced in collaboration with other technical sponsors, including DuPont, and designed by the Milan-based Bertero Panto architectural firm.

Thanks to the formability, feel and technical properties of Corian® solid surface, the museum display solutions, a sort of ribbon with curves that produce a visual echo of a sound wave, combine to create a strong visual impact – with a decidedly contemporary feel – with important functional features. As they develop through space, the Corian® solid surface ribbons form shelving - sound waves and strips that run along the floor - creating a continuity of design between the various parts of the hall.

“The idea of the sound wave is to give a modern, playful and theatrical keynote to the setting of the Sound Section–TDK Hall,” explains architect Fabrizio Bertero, of the Bertero Panto architectural firm, who designed the hall. “Most visitors to the museum are students, and we need to arouse their curiosity immediately, stimulate them to come in and get familiar with a fascinating world that is so close to theirs, that of sound and music reproduction.”

Adjacent to the Leonardo Gallery is the Time Measurement section and Workshop of the stringed- instrument maker. The new Sound Section makes the most of the limited space available (62.5 m²) thanks to the use of Corian® solid surface in Pearl Grey ribbons “unfurling” parallel to the longer walls (6.4 m) and other ingenious interior design architectural solutions. These include, for example, a back-lit opaline glass wall, which seems to broaden the room, and a number of ultra-clear glass cabinets that house the objects on display without obstructing the view.

“In this project we wished to emphasise the many dynamic features of the Corian® solid surface material, including its thermoforming capabilities, strength and seamless design, due to its invisible joints. Just think – the longest ribbon measures 16.1 metres and is just 13 mm thick, and the waves are up to 1.3 metres high with a width of only 56 cm, so clearly no other material could have allowed us to achieve these shapes with such a monolithic appearance,” continues Fabrizio Bertero.

Besides its extreme formability, the material for the ribbons had to be rigid enough to support the objects where it is used as shelving and trample-proof in the sections that come down to become part of the floor. The rest of the floor is an acid green epoxy resin, creating a pleasing contrast with the pale shade of Corian® chosen: a non-textured light grey.

In the interactive area, the ribbon rises up to become the mounting for the touch screen through which visitors can interact with the computer. In this installation the different properties of Corian® solid surface come to the forefront, such as its pleasant touch and nonporous surface, which makes it easy to clean and stain resistant.